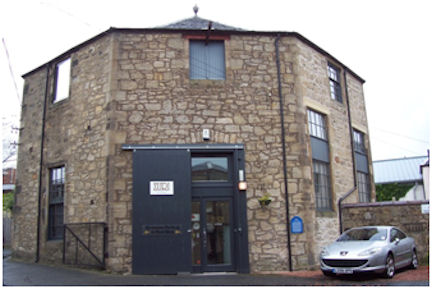 1747:   The oldest seceding church in Falkirk,   the   Erskine   Associate Congregation, was split over the taking of the Burgess’ Oath.   In common with other places this “Breach” resulted in the formation of an Anti-Burgher or General Associate congregation.   Initially these joined with the congregations of the Craigmailer Church until 1756 when they formed their own separate church.

1771:  A church erected on a feu belonging to the minister on the east side of Callendar Riggs.

1781:  The  minister  and  the  majority  of  the  congregation  severed  their connection with the Anti-Burgher church, forming a group known as the Lifters.

1782: The remaining minority of the congregation, the Non-Lifters, erected a place of worship at the north-east corner of St. Crispin’s Place.

1806: The Tattie Kirk erected just off the Cow Wynd.  The origin of the name is questionable.   One version states that it is because the church was erected in a potato field, another that the congregation sold potatoes to raise the necessary money, and a third that the church looked tattie.   The last can be easily dismissed.   Its hexagonal plan soon earned the church another rural nickname _ the “threshing mill”.   It measures 46ft across internally, and the masonry is of rubble with dressed quoins and margins.  The slated roof rises to an urn finial.   There are two ranges of windows of which the upper lights a gallery.  On the north side of the building entrance doorways give access both to the ground floor and to the gallery, the latter being approached by an external stone stair.  On the south-east side of the church a doorway, which is now blocked, may originally have given access to the pulpit.  In the original arrangement the pulpit probably stood against the south wall, while a gallery, supported on moulded wooden columns, ran round the rest of the building.  The church is said to have had a seating capacity of 580.  The interior is now much altered and after some years as a tool store and workshop for Sime’s the Tool Merchants it is now a boutique with an office above.   The cost of erection is put at £850.

1820:  Burgher and Anti-Burgher churches amalgamated as the United Secession Church.

1847:  The Secession and Relief churches join to form the United Presbyterian Church.

1879: Last service held in the Tattie Kirk.   Congregation removed to new building in 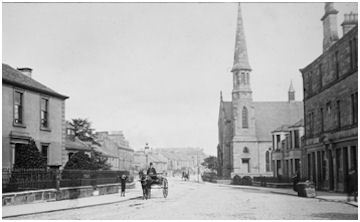 Grahams Road.   The architect for this building was Alexander Watt of Renfield Street, Glasgow, and the masons were J & A Reid, Falkirk.  In the centre of the front elevation there was a projecting door, at the sides of which were columns with carved capitals and bases.   Above this doorway was  a large  three-light  ornamental  arched window,  with  quatrefoil  and  circular openings at the top,  and finely carved stone panels in the lower portion.   On each side of this window was a single-light arched window.   The upper or south side of the front wall was ornamented by a spire, which was square at the base and octagonal above the eaves of the church.   It rose to a height of 110ft.  The spire had eight square panels of quatrefoil design, and also carved projecting grotesques at the angles.   The side elevation, which faced Galloway Street, had five two-light arch-headed windows, and a side door leading to the area of the church.   The back wall had two double-light arched pulpit windows, and a circular light trefoil opening containing stained glass.   A gallery across the west end gave a total accommodation of 600.   The pulpit was placed on a raised platform at the east end, opposite the gallery.   It had an ornamental curved railing in front and an arched back.   At the back of the church were situated the session-house and vestry.

The church hall was built later the same year, space being left for it to front Grahams Road, to accommodate 200.  The whole cost estimated at £3896.