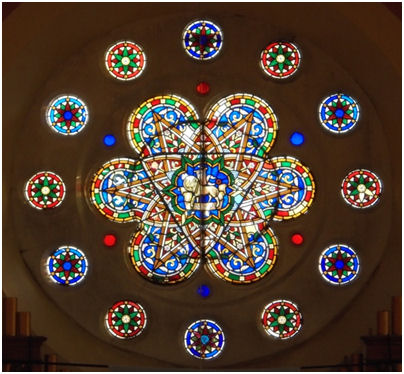 (1) The east gable of the church erected in 1875 has a wheel window twelve feet in diameter with suitable tracery, the whole of the openings in the window being filled in with stained glass, the centre of which represents “the Lamb” and the “Pastoral Staff,” and bears the motto, in scroll, “Agnus Dei.”  It was the work of Mr Small, Leith Walk, Edinburgh. 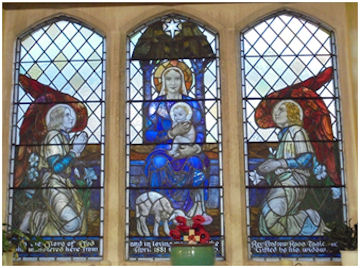 (2) At her death in 1938 Mrs Taylor, the widow of the minister, left money for a window.  It was designed by the Glasgow artist, Douglas Hamilton, but executed by Daniel O’May and depicts the Madonna and Child.  Two side panels portray attendant angels in an attitude of adoration.  The central figure is surmounted by a star which shines from above the manger recalling the visit to Bethlehem of the Wise Men from the East, while in the foreground the artist pictured a lamb, the symbol of the presence of humble shepherds from the Judean hills.  The entire scene is depicted in exquisite and varying shades of colour in which blue and red predominate.  The inscription beneath the memorial records that the window is dedicated “To the glory of God, and in loving memory of Rev. Andrew Ross Taylor, MA, who ministered here from April 1881 to March 1926.  Gifted by his widow.”  Installation was delayed until August 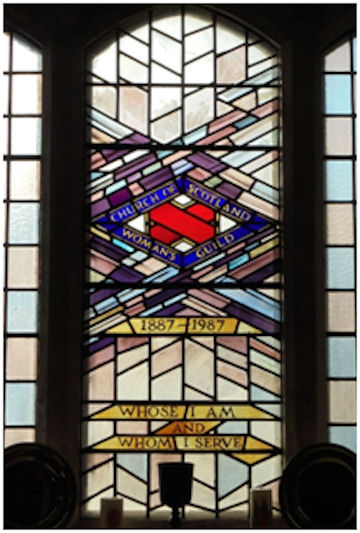 (3) Women’s Guild Centenary window designed in 1987 by Roland Mitton of Livingston.  It occupies the central light of a three-light window.  It features the Guild logo of a red cross within a blue lozenge fringed with gold (yellow).  The alignments of the sides of the lozenge are followed by a series of leaded plates of coloured glass.  Above and below this the glass plates are vertical and paler.  “CHURCH OF SCOTLAND/ WOMEN’S GUILD/ 1887-1987/ WHOSE I AM/ AND/ WHOM I SERVE”.  The background colours are reflected in the lights to either side. 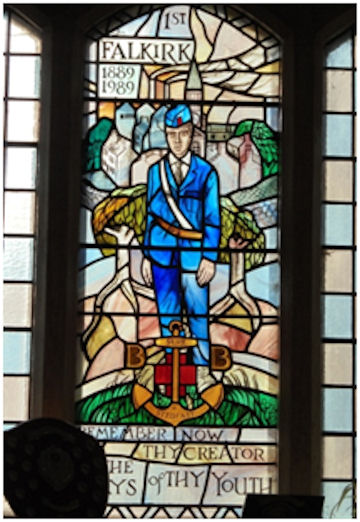 (4) This window is similar to (3) in that the decorative panel is placed in a central position in a three-light window.   It was presented by the Boys Brigade whom it features against a backdrop of local industry.  It shows a boy in uniform standing in front of two trees with Falkirk Steeple – the clock set at 4 o’clock – just above his left shoulder.  The Steeple stands in a huddle of houses, with chimney stacks on the horizon from which plumes of smoke emerge.  The Boys Brigade anchor “SURE/ STEDFAST” stands at his feet with a short red cross behind and the initials “B  B” to either side.  At the top are the words “1ST/ FALKIRK/ 1889/ 1989” which continue near the bottom “REMEMBER NOW/ THY CREATOR/ IN THE DAYS/ OF THY YOUTH”.  The Biblical reference comes from Ecclesiastes 12:1 “Remember now thy Creator in the days of thy youth, while the evil days come not, nor the years draw nigh, when thou shalt say, I have no pleasure in them.” 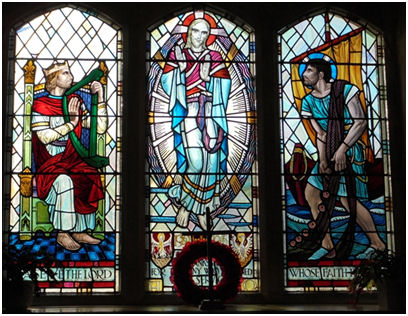 (5) A three-light window with a large figure in each.  In the centre Christ stands elevated and cocooned in an oval surround.  Rays of light emanate from him.  In the left light King David sits on his throne and plays a green harp whilst looking up at Christ.  Peter in the guise of a fisherman with his nets draped over his left shoulder and fishing boat behind looks up from the opposite light.  Along the bottom is the legend “PRAISE YE THE LORD/ WHOSE FAITH —-“  The central panel reads “1939  1945/ IN THANKSGIVING/ FOR THE MANY WHO — DIED/ IN THE SERVICES”.  Here too are the Greek letter alpha and omega, and shields containing a pelican feeding her young on a nest and a phoenix rising from flames. 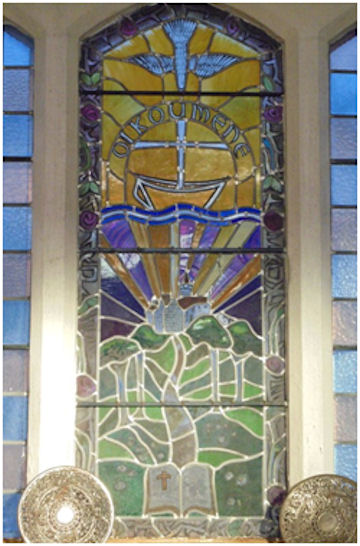 (6) A heavily stylised window with an open Bible at the bottom at the end of a path leading across green fields and through woods.  At the other end of the path is a town with a church in the centre – its clock set to half past four.  Rays of light radiate out from the settlement and stop at three wavy blue lines representing a river upon which the bald outline of a boat rests.  The mast is in the form of a cross.  In an arch around the mast are the letters “OI KOUMENE”.  The Bible, path, boat and mast form a vertical axis which ends with a downward plummeting dove.  The narrow border surrounding the window is filled with the leaves, thorny stems and flowers of a rose.

Below the window is a brass plaque which provides the dedication: “This window was dedicated on 31st March 2002 to the Glory of God and in loving memory of the Rev. Duncan E. McClements M.  D. MTH. Who, in the name of Christ, served this United Congregation, parish and community for 24 years 1976-2000.  There are three things that last for ever: Faith Hope and Love, but the greatest of them all is Love.”

The word oikoumene, from which the term “ecumenical” derives, means “the whole inhabited earth”.  In the original Greek, it reflected the interaction of religion, philosophy and political administration as they shaped society. When the New Testament reported an imperial decree that “all the world” should undergo a census (Luke 2:1), the reference is to oikoumene.  It is used on the World Council of Churches logo along with a boat afloat on the sea of the world with the mast in the form of a cross.

Location: The stained glass window is the central light of a three-light window on the north side of the church (centre) and rarely receives direct daylight. 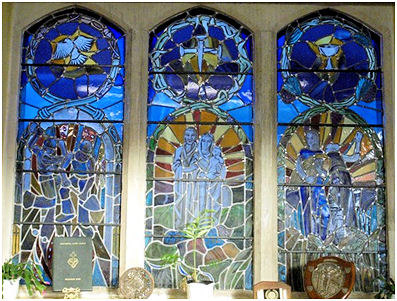 at the top and  hues of green and brown in the foliage at the bottom.  Each light contains two figures in an arched frame that extends upwards to form a circle.  In the centre a bearded man and a woman holding a baby are no coloured and represent the Holy family.  The circlet above is framed with thorns and contains crossed nails indicating the sacrifice of Christ.  The right-hand panel houses two women, one in a blue gown holding a sheaf of wheat and behind her one with a long handled implement, possibly a hoe – agriculture.  The left-hand panel has two active miners, one with a shovel and one with a heavy hammer – industry.  The circlets above these contain a chalice and a dove respectively.