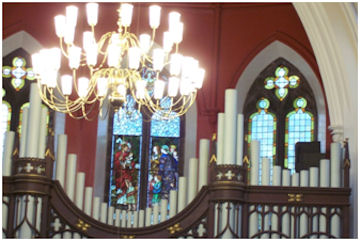 (1) 1896: The stained glass window behind the pulpit was given by provost Weir in memory of his son, and has been partly obscured by the organ.  It was designed by the Blythswood Stained Glass Co, Glasgow.

It occupies the central of three two-light windows (each 10ft by 2ft) with the scene carried across both showing Christ in a red robe holding a small child with three children in the foreground and three mothers and a baby to the right.  Verdant green foliage fills the background up to the glazing bar, above which is pale blue leaded glass.  The inscription at the base reads: “Suffer little children to come unto me,” and at the base there is also the following inscription: “Erected by John Weir, Provost of Falkirk, 1895, in memory of his son, William Alexander, born 1861, died 1865.”

(2) Window erected in December 2005 from a legacy of Miss Agnes Watt in memory of her parents John and Ann Watt and her sisters Christina, Elizabeth and Ann.

It is in a pre-Raphaelite style and shows a man standing in a brown robe with his arms outstretched downwards.  In front of him are two blue robed women.  The woman on the right is standing and holds a water pot in both arms; the one on the left crouches with a musical string instrument beside her.  The background is filled with colourful fruit and flowers.

One of the green leaves at the bottom contains the signature of Roland Mitton.

(3) Window in memory of James Strang and his family, presented in 1978 by his grandchildren in British Columbia, Canada.  It shows St Margaret with a gold crown, blue veil and red cloak holding a bible in the crook of her right arm.  To either side of her is a small boy, richly dressed, in an attitude of adoration – one holding a bunch of daises.  Above her halo is a saltire.  “SAINT/ MARGARET SCOTLAND”.

The artist’s signature, “J. BLYTH/ ‘76” can be seen near the bottom right corner.  Placed in the east wall.

(4) Window presented by the congregation in March 200? To their previous minister.  “To the Glory of God/ in memory of Rev. dr. ROBERT M’Ghee”.  It is very modern and angular in style with black given as a prominent background.  It depicts a preacher holding a book with alpha and omega on the cover.  His right hand is raised in blessing.  The preacher is identified in large letters across the legs as “John”.

The artist’s name appears by the right foot – “Roland Mitton”. 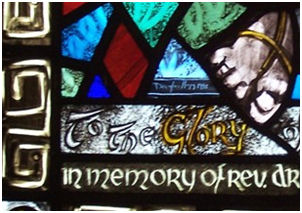 (5) Erected by the congregation in memory of Rev. Robert Pollock in 1974, this window is now obscured by the poor lighting that resulted from roofing over the light well.  It shows Christ in a white robe and red cloak standing with his hands outstretched in blessing.  Along the bottom it says “I AM THE LIGHT OF THE WORLD”.  St Andrew’s Church is accurately drawn on the bottom right.  The opposite corner has a Maltese cross with a garter reading “IN THIS SIGN CONQUER” and a crown above – the emblem of the army pastors.

(6) Installed by the congregation in May 1994 to the memory of David Gillies, organist and choirmaster.  It shows Saint David standing on a small island with his shepherd’s crook in his right hand and a harp in his left.  He wears a green robe and red cloak.  His head is surrounded by a blue nimbus and “DAVID” and a crown above.  The text appears across his legs reads “O/ ENTER/ THEN// HIS/ GATES/ WITH PRAISE”.

It depicts St Ninian standing in front of the church that he founded at “CANDIDA/ CASA” (Whithorn) with its bell.  He is dressed in the rich robes and shoes of a bishop with a mitre on his head and shepherd’s crook in his left hand.  There is a cross on the back of his right hand which holds a bible.  An oval red shield at the bottom right bears the chi-rho emblem of the early church as used by St Ninian.  St Modan was a disciple of St Ninian and all this reflects that Rev Johnston had a special interest in the place names of Scotland.

(8)  Memorial window for Andrew Wallace provided by his widow and daughter.  He was the provost of Falkirk from 1950 to 1953 and was a senior elder of this church.  It is for this reason that the Falkirk Burgh coat of arms appears in the bottom right hand corner – a crowned lion holding a shield bearing the six gold ingots of Callendar with the Antonine Wall symbolised as a diagonal battlemented bar.  The accompanying motto is “BETTER MEDDLE/ WI THE DEIL THAN THE/ BAIRNS O FALKIRK.”   The foundation of the church at Falkirk is attributed to St Modan and it is he that is depicted wearing a red cloak over a grey robe tied at the waist by a rope belt.  He holds a crossed staff in his right hand.  To his right is an outline of a Celtic cross, and to the left an entwined Celtic knot design.

The name of the artist and date occur on the bottom left corner of the window “W. WILSON/1960”.