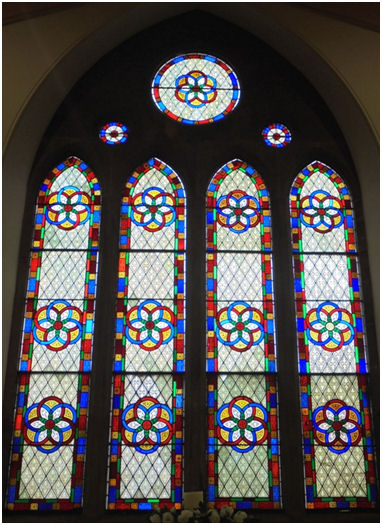 (1) Now in the north gable of the nave at Laurieston Church, these lights were formerly in the Falkirk Old Kirk, transferred in 1896, but originally made in 1852.  These are bright geometric patterns consisting of interlocking circles.  Made by Ballantine & Allan of Edinburgh.

(2-3) Two windows in the chancel apse on the south side of the church were dedicated in January 1932.

The general theme of the memorial windows is the equal citizenship of man and woman, and together with the war memorial window in the centre of the chancel they form a harmonious whole.  They respectively symbolise “Home”, “Church” and “World”.  In the “Home” window on the left, which bears the inscription “To the GLORY of GOD and with/ remembering love/ of MRS ROBB, wife of the minister of this/ Parish & worker in the cause of WOMEN.” there is standing at the door of a humble thatched cottage a devoted mother with drawn face and bent form, with a lighted torch in her hand and head bare.  Before her, a young, bright girl, dressed as for a long journey, and as the book which she holds open in her hand seems to suggest, she is well equipped for it.  The girl is the woman’s dearly beloved eldest child.  The window depicts one of the great tragic moments in a women’s life.  The mother realises, in her own experience, that the Cross is the only way by which the Home and Womanhood may be redeemed.  For her child’s sake she mounts it and braces herself up to bid her child God-speed on the great adventure.  The little son, sensing that something big is happening, has shyly accompanied his mother to the door.  Although quite unconscious of it, he lends her just that human strength without which she may have felt she could never have faced the ordeal of parting.

To the right, on the west side, is the “Church’s” window, a complementary picture, bearing the inscription “These windows were given by/ this Congregation and Friends/ 24 JANUARY 1932.”  It represents the second chapter in the great story of woman.  On making her way into the world this home-guided, home-inspired woman found the Church.  Here it may be conjectured, she spent many happy, profitable years sitting at the feet of the master, acquiring wisdom, equipping herself the better in soul and mind for the real battles in life that lay still ahead of her, until the Church became like a second and a bigger home.  The Master has become the Father; this is a sign to her that it was time again to take once more to the road.  This picture depicts the second tragic experience in her life of the adventure, when she may feel that neither within the Home nor merely within the Church, but in the wide world is woman to find herself and her true sphere.  Here St Columba stands with crook in hand, a noble figure at the door of his Church, to bless this young zealous woman disciple, as she sets out on the last and greatest chapter of her life, to bear the message of the Home and the Church into every sphere of life.

These two windows were design was by Margaret Chilton and Marjorie Kemp of Edinburgh.

(4) The central window was re-interpreted to become the key to the others.  It is the “World” window.  Here, can be seen the iron worker, miner, sailor, farmer, all hard at work, with the master in the midst, none but a Presence, yet active, inspiring, sending shafts of His power into the darkest, dullest and most monotonous of callings, redeeming them however, from drudgery, and from weariness otherwise insufferable.  Even here there is no real abiding place for a living soul, and so the woman is seen seeking to penetrate into the mysteries of the tomb, or again, if the eyes are directed to the uppermost panel, there is revealed the vision of the New Jerusalem with the world on its knees, and the Christ still far beyond, the ever-escaping one.  No more can be seen, yet the feeling is created that the end has not been reached.  The lower panel contains the names of those of the congregation who gave their lives in the Great War together with the inscription “To the Glory/ of God &/ in thankfulness for the memory/ and inspiration of those men of ours. Who were faithful unto/ death. 1914-1918.”

See War Memorial for names of the fallen.

This central window was dedicated in 1926.  The design was by Margaret Chilton of

Edinburgh, aided by Marjorie Kemp, and her theme was “Christ and Modern Life.”  In the central panel Christ is represented as one who has made a noble fight, has won through, and now has the world under His feet.  He is calm, serene and faithful with His eyes upward cast.  Modern life is represented in four panels by figures of men engaged in such industries as were to be found in and around Laurieston – agriculture, ironfounding, dock labouring and mining.  This was not “merely cherubism and seraphim, but something of the realism of the people’s life.”  In the lowest panel of all is a picture of the visit of the two Marys to the tomb of Christ and there meeting the Angel of Life and not of Death.  The uppermost panel contains a representation of the adoration of the Christ of the ascension “Laborare est orare (To labour is to pray).  The window attempts to depict the penetration of the workmen’s spheres by shafts of Light from the Christ, to show that all labour is Divine.  The Light represented Christ’s life and compassion and by putting it into the spheres of labour He is redeeming them from their drudgery. 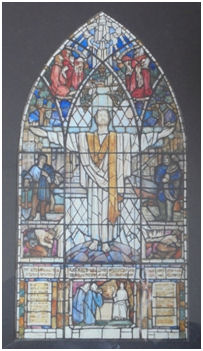 Can you spot the differences between the artist’s original design and the completed stained glass window?