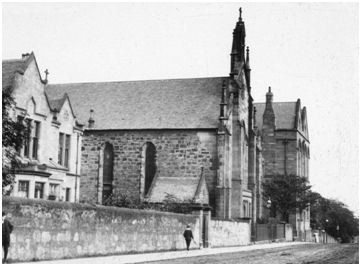 1834: Chapel built in Stirling and visits made to Falkirk.

1843: New chapel opened 28th May.   Designed by William Stirling, architect, Dunblane, in the Saxon style.   The east gable faced onto Hope Street and contained the entrance door.   It was surmounted by a belfry.   The body of the church measured 80ft by 40ft, and was lofty at 30ft to the wall heads.

1878: Falkirk placed in the Archdiocese of St Andrews and Edinburgh.

1881: R.C.  Institute built on site of old R.C. school in Manor Street.  It was three storeys high, the upper storey being a dwelling.  Designed by B M’Fadzen, Edinburgh. (Demolished 1987).

1921: Schawfield, further to the north in Hope Street, purchased with the intention of building a larger church there.

1960: Foundation stone of a new structure laid on 2nd April on the site of the 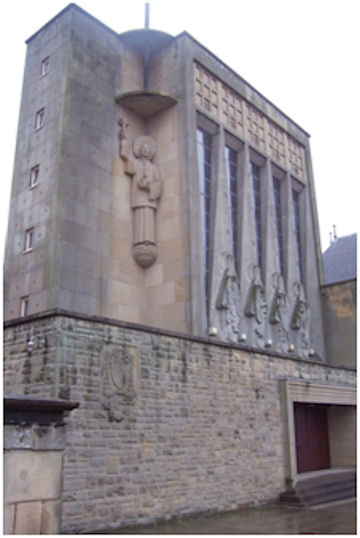 old chapel and opened in October the following year.   The most prominent feature of the facade is a 12ft tall statue of St.  Francis Xavier carved from a solid block of Blaxter stone by Maxwell Allan, Edinburgh.   St. Francis, the patron saint of the church,  is shown wearing the robes of a missionary  looking out  over  Falkirk  and westward in the direction of Japan and India  where  he preached the gospel in the early sixteenth century.   He holds a crucifix aloft in his right hand.   At his feet are the coat-of-arms of the noble Spanish family (these are also used as a school badge).   On the facade  proper  are sculptures  of  the  four evangelists,  each 9ft 4ins  high,  carved  out  of concrete  by Mrs E Dempster using power drills.   They adorn the embrasures of five great triangular windows.   From left to right they represent St. Mathew (lion); St. Mark (man); St. John (Eagle); St. Luke (Ox).  On the outside wall of the porch are the coat-of-arms of the Most Rev Gordon Joseph Gray and the motto “May the Holy Spirit be my guide and support”, executed by Hew Lorimer.   The main  doors  under the east window are only used on  ceremonial  occasions  and entry  is  usually  by the side door with the baptistery to the  right,  and  a stairway  and  bell  tower to the left.  The tower contains only electrical chimes.   Opposite the side entry is the mortuary chapel.   Glass doors give access to the main body of the church.  At the west end is a simple altar faced with Kenton stone.  A tabernacle behind this bears the inscription “Ecce Agnus Dei” (Behold the Lamb of God) on bronze doors.  Seven bronze lamps hang from the roof, and a canopy and a large crucifix over the altar.  The wall behind the altar is of plain red brick decorated with 35 gold crosses.  The Stations of the Cross are painted as a continuous narrative on large panels, forty laminated glass panels above in bays of five, by Felix McCullough, artist.  The architect for this new style of building was A R Conlin of Edinburgh.

1843: Rectory built to the south of the church.

1901: Old rectory demolished and a new one constructed slightly further west according to a plan by James Strang, architect, Falkirk.  The mason was George Sanderson.  Cost £2000.

1894: New high altar constructed for the Golden Jubilee at the west end of the church by Messrs Boulton and Son, Cheltenham.   Designed by Messrs Pugin and Pugin in the Gothic style it was constructed of marble and Kane stone.   One solid stone was supported on four marble pillars and two angels.   In relief on the centre panel were the chalice and host, embodied in grapes and corn.   Two side panels bore adoring angels, with two super altars in Italian marble.   The canopy stone, weighing something over a ton, held by eight marble pillars.  The reredos was of green Irish marble and on the front of the altar a representation of the tabernacle door in beaten brass and jewelled.  Mounted on the altar were statues of St. Patrick and St. Francis Xavier, and behind the throne three adoring angels.  On top of the pinnacle which stood 21ft from the ground was an emblem of the holy Eucharist, a pelican feeding her young.  There were also two side altars, one to the Sacred Heart (gospel), and one to the Virgin (epistle).  Total cost £600.

1961: Solid bronze lectern adorned with an eagle.  Six candlesticks designed by Conlan, with the statue of a saint at the base of each – Andrew, Margaret, Ninian, Columba, Mungo, John Ogilvie.