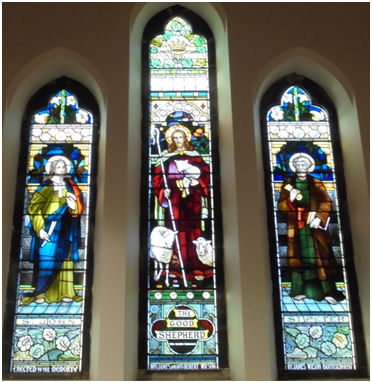 (1)  Three stained glass windows above the platform were “ERECTED TO THE MEMORY of MRS JAMES WILSON AND MRS ROBERT WILSON BY JAMES WILSON OF BANTASKINE. 1897” – these were his wife and daughter-in-law.  In centre – “THE GOOD SHEPHERD”, staff in right hand, lamb in left, two sheep at feet, crown of Victory “CORUNA VICTRIX” above.  Left – “ST.  JOHN” the Evangelist, book in left hand, feather quill in right hand.  Right – “ST.  PETER” with the keys of heaven and a bell in his right hand and the book of names in left hand.  Lilies fill the spaces above and below the figures.

(2) A side window “In remembrance of James Towers who died 10th Sept 1890 aged 73/ Also Margaret McKirdy his wife who died 16th July 1892 aged 76/  Erected by their son Alexr Towers.”  It shows – Moses pointing to a brazen serpent on a cross above his head, cinquefoil above.

Windows 1-2 were all installed by the Blythswood

Stained Glass Co, Glasgow, whose senior partner, Daniel O’ May was a member of the congregation.

The artists of that company donated a small window above the Towers’ window, showing a lamb holding a flag with a cross and the words “Agnus Dei”. 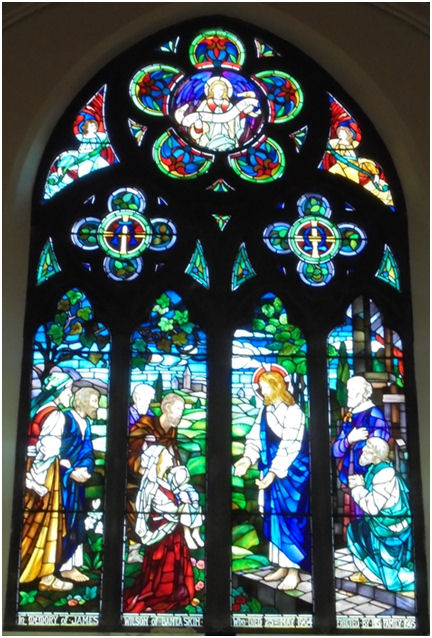 (3) The Towers Memorial window was moved into the north transept and a new stained glass window placed in the Orchard Street gable.  This has as its subject the words of Jesus “Come unto Me, all ye that labour and are heavy laden, and I will give you rest” and shows Christ healing the sick.  On the left is a group of four men and a woman looking towards Jesus.  The background here is one of rolling hills with a church at the top.  The man at the back has a head dress and carries a rolled up scroll in his hand behind his back – is he a man of medicine?  The woman is on her knees at the front and holds a sick child.  Jesus stands on the lowest step in front of a building and behind him, on the next step, are two of his disciples.  The tracery above the main widow is filled with coloured glass in geometric designs.  The two minor quatrefoils have the letters alpha and omega; the spandrels red-winged angels; and the upper rose an angel holding a ribbon banner with the words “COME UNTO ME”.

The inscription along the bottom reads “In MEMORY of JAMES WILSON of BANTASKIN Who Died 25th May 1904.  Erected by his family.  1905.”