The village of Avonbridge lies on both sides of the Avon with the larger part being in the parish of Slamannan and the lesser in Muiravonside Parish. Although there has been a settlement there for several centuries it only acquired the name ‘Avonbridge’ quite late; indeed the first overt mention of it under that name comes from the first edition of the Ordnance Survey around 1865. However, a record of 1699 has ‘Avonbridgend’, presumably to distinguish it from several other Bridgends in the district. In earlier times the only bridge spanning the Avon was the one know today as Linlithgow Bridge and, for obvious reasons, it was then called ‘Avonbridge’. When the bridge at the village of Avonbridge was built is not known but it must have been in existence by at least 1590 as the settlement closest to it on the south side of the river was then known as ‘Brigend’. In 1605 it appears as ‘Bridgend of Even’ and several other notices from that century have the same form, albeit with variations on the spelling of Avon. Nevertheless, most records of that time simply name it ‘Bridgend’. As late as 1839 Avonbridge had not developed into a village; the minister of Slamannan parish at that time states: “In this parish there are no villages, only a few places where there are a few houses, (at Slamannan church, Balcastle, Crossroads)”. It was probably the arrival of the railway that made Avonbridge a focal point for a settlement for it encouraged some small scale coal mining in the vicinity. Then the various adjacent small settlements merged into the village.

The most southern part of the village is in the lands of Dalquhairn and this name was used alternatively with Bridgend for the earlier settlement. From 1682 and 1685 come notices of it as Westbridge of Evineand, in a description from 1723, we learn: “Its [the River Avon] course from its rise to the bridge at Dalquhairn (which is commonly called the west bridge of Aven) is almost Southeast.” Here we find ‘west bridge of Aven’ used to distinguish it from the east bridge of Avon which was, of course, Linlithgow Bridge. Dalquhairn is mentioned as ‘Dalwhurn’ in 1536 and there are several variations in its spelling during that century, such as Dalwhairin, Dalquharne, Dawquherne. This is a Gaelic name which translates as ‘meadow of the cairn’. It must have been a site of some significance in the dark ages. Interestingly, Timothy Pont shows it on his map as ‘Dalwhurn’, harking back to that earliest recovered notice, and, as he wrote the names of places as he heard them, we can be reasonably sure it was so pronounced. The smaller part of the village which lies on the south side of the river includes a part known as Ballenbriech, yet another Gaelic name, this one having the meaning ‘bankside town’; Gaelic baile had the sense of a township farmed communally.

The bridge over the river at Avonbridge was described in 1865 as “An old stone bridge of one arch spanning the River Avon on the parish road leading from Falkirk to Bathgate.  Date of erection unknown.  The numerous houses on either side of it are classed as a small village and known by the name of Avonbridge, but most of them have distinctive names.  The bridge is kept in repair by the parishes of Muiravonside and Slamannan.” There were several mills on the Avon in the area of Avonbridge, including Dalquhairn Mill. James Shaw and his wife, Agnes Fleming, were granted a charter from Alexander, Earl of Linlithgow, in 1613 which contained the privilege of “constructing a mill in that part of Dalquhairne”. On the south side of the river what was latterly known as Waugh’s Mill. This was actually one of the baronial mills of the Barony of Haining and was know as both Haining’s Mill and Ballenbreich Mill.

Apart from agriculture and milling the earliest activity there was its use as a crossing place for drovers driving animals south from the Falkirk Trysts. There is some evidence that it was also a habitual place for these droves to pasture overnight in their journey. Coal, as mentioned, was mined on a small scale in the nineteenth and early twentieth centuries and was extracted by opencast mining in the mid-twentieth century. A brickwork, formally known as Avonbridge Brickworks, lay about 2 kilometres to the east of the village. Known locally as ‘the Tinplate’ it operated from around 1952 and 1977. Today Avonbridge is essentially a residential community. 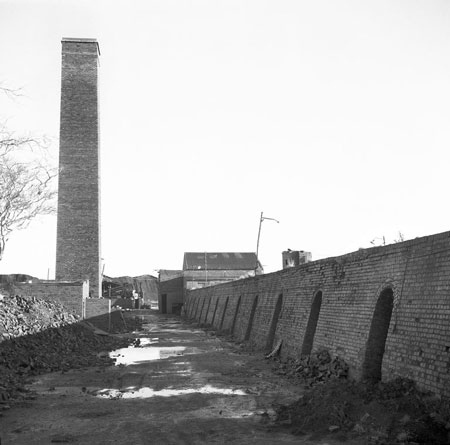