(1) A five-light window showing the eleven disciples, some kneeling and some carrying staffs, in green and blue cloaks, looking up at the ascendant Jesus in his brilliant white robes.  To either side of him is an angel with purple wings.  In the smaller lights above is a heavenly host in contrasting red.  The inscription along the bottom reads “ALL POWER IS GIVEN UNTO ME IN HEAVEN AND IN EARTH”.  This is known as the Ascension Window and commemorates Queen Victoria’s jubilee in 1887.  It was unveiled in September 1903.

(2) King David praising the Lord with a harp in the Temple – a bearded man wearing a golden crown and blue and purple robes stands playing a harp, which rests on an altar inside a pillared and arcaded temple.   The bottom panel has the sailing ship of the Bo’ness coat-of-arms and the inscription: TO THE GLORY OF GOD/ WILLIAM WELSH PROVOST OF/ DIED 11TH MARCH 1907”.

(3) Partner of (1) depicts a bald and bearded man [Hehemiah] in blue and purple robes holding a two-handed sword in his right hand and an architectural plan in his left.  It shows him building the walls of Jerusalem, the buildings of which can be seen in the background.  Between him and the town is an olive plantation.

The bottom panel reads “AND IN LOVING MEMORY OF/ BONESS & ELDER IN THIS CHURCH/ ERECTED BY HIS FAMILY/ JANUARY/ 1908” with “SINE METU” (the town’s motto) to the right.  At the bottom right corner is the name of the maker “W J MEIKLE & SON/ GLASGOW”.

(6)  This brightly coloured window is in a modern impressionistic style.  A bearded long-haired man (Christ), with halo, stands with both hands raised.  In front of him kneels a similar man wearing the usual robes and sandals.  He seems to have three hands.  This depicts the washing of the disciples’ feet.  At the top is a vignette housing three children.  The bottom panel reads “THESE WINDOWS WERE/ ERECTED BY HIS WIDOW/ MARY SCOTT GRAHAM/ WHO DIED 17 JANUARY 1937”.  To its left is the sailing ship of the Bo’ness coat-of-arms and the motto “SINE METU”.  Unusually there is a golden heraldic lion above; to the right is a St Andrew’s saltire in a shield.

(7)  The partner to (6), it shows Jesus with one hand raised in blessing and the other on the shoulder of a hooded kneeling man who has his eyes closed [Blind Bartimaeus].  The bottom panel reads “TO THE GLORY OF GOD AND IN MEMORY/ OF DR. JAMES DALRYMPLE GRAHAM/ AN ELDER IN THIS CHURCH AND/ SUPERINTENDANT OF SUNDAY SCHOOL/ DIED 22 DECEMBER 1925”.  There is a chi-rho emblem on the left and palm leaves to the right.  The upper vignette houses a seating figure, slightly stooped forwards.

(8)  (below left) An airman dressed in thick boots, gloves, helmet, goggles, etc, stands in front of his aeroplane with a piece of paper in his left hand.  Searchlight beams intersect the blue sky behind and stars dot the upper area.  Above and surrounding his head is the winged logo of the RAF with a roundel bearing the Latin motto “PER ARDUA AD ASTRA”.  At his feet are the words (carried over from (9) “THEY/ WERE/ STRONGER/ THAN/ LIONS/ OF THE ROYAL/ AIR FORCE AND THE/ AIRMEN OF THIS/ PARISH & CONGREGATION/”.  The pilot depicted is the late John Oliver of Bo’ness who served with the Special Operations Executive.

Unveiled by the Duke of Hamilton AFC, Hon. Air Commodore of 602 Squadron in October 1948.

(9) (above right) St Michael with the pink-bladed Sword of Spirit in his right hand and an upright spear in his left overcoming evil.  He is wearing plate armour and a white robe sporting Christian crosses.  At his feet is an abject green dragon and to either side of his shoulders a white eagle, with prominent yellow beaks, swoops down.  Above him is the heraldic lion of Judah.  His feet rest on a roundel containing a flying plane caught in the beams of searchlights.  An interlaced ribbon reads “THEY WERE/ SWIFTER THAN/ EAGLES” and continues “TO THE GLORY/ OF GOD AND/ A TRIBUTE TO/ THE VALOUR”.

(10)  (below left) A bare-footed woman, identified in the ribbon above as Mary, stands facing the viewer.  She wears a white robe, covered by a blue cloak and pale pink head scarf.  Her arms are brought together over her chest and clasp a book.  Behind her are a well, trees and flowers.  This foliage extends to the top of the window where a winged soul peeps out.  The panel at the bottom reads “To the Glory of GOD and in Loving memory of/ Catherine Hamilton Stevens Johnston/ Who died April 8th 1926/ Erected by her Husband and Family”.

(11)  (above right) Another bare-footed woman, this time identified as Martha.  She has blue robes and a pink head scarf over a white tunic and holds a set of keys in her left hand and a basket of fruit in her right.  Water springs from an urn at her feet.  The inscription on the bottom panel is the same as (10) above, ie. bottom reads “To the Glory of GOD and in Loving memory of/ Catherine Hamilton Stevens Johnston/ Who died April 8th 1926/ Erected by her Husband and Family”.

(12)  (below left) A heavily robed bare-footed figure with a youthful face and locks of golden hair highlighted by a halo (St John).  His right hand is raised in supplication.  Above is a winged angel with a banner “BLESSED ARE THE PEACE MAKERS”.  This message form the Sermon on the Mount suggests that the figure is Jesus.  Two more angels support a scroll on the bottom of the window “TO THE GLORY OF GOD IN MEMORY OF DAVID TAYLOR/ POSTMASTER BO’NESS AND ELDER IN THIS CHURCH/ ERECTED BY HIS WIDOW AND FAMILY”.

David Taylor was an elder of the church.  Dedicated January 1913.

(13)  (above right) The partner window to (12) shows a bearded and haloed elder statesman in blue robes holding a rolled scroll in his left hand and his right arm outstretched upwards (St Paul).  The ribbon above reads “BY THE POWER OF GOD/ BY THE ARMOUR OF RIGHTEOUSNESS” (partly hidden by the metal supports).  The bottom is similar to (12) and contains the same inscription.

A set of five windows that should be read continuously from left to right.

(14)  Bearded and bare-footed man standing with his warms raised and palms open.  In front of him a woman with a red cloak rests on one knee looking up with her arms raised.  In the background is verdant vegetation.  “Mary in the Garden.”  On a scroll below are the words “RABBONI MASTER” and below this again “TO THE GLORY OF GOD”.  A lozenge shaped pane of glass has the maker’s name “W. WILSON/ R.S.A./ [crown]/ ER” At the top is the lamb of God, its head tilted back to receive the sun’s rays.

(15)  (below, extreme left)This scene shows three standing male figures.  The two bearded men on the left inspect the nail puncture holes in the hands of Jesus, who is highlighted by a halo.  “Doubting Thomas.”  Behind the men a blue curtain hangs from a rod.  There is a bunch of grapes above.  “BE NOT FAITHLESS BUT BELIEVING/ and in Loving memory of”.

(16)  (above, second left) Three women approach from the right, one (dressed in red) carrying an urn and another (in blue) a bunch of flowers.  Behind them three crosses can be seen silhouetted against the sky on Calvary Hill.  “The Empty Tomb.”  A golden coronet lies above.  In front of them sits a winged angel from who light emanates.  His right hand points upwards and the text below is “HE IS NOT HERE/ HE IS RISEN”.  The basal text continues “James Thomson LRIBA, FRIAS/ Died 3rd September/ 1949.”

(17)  (above, third left) Jesus sits at a table and with his right hand raised blesses the bread in his other hand.  “The Emmaus Meal.”  On the other side of the table are two sandaled and blue-robed disciples.  Behind them is a red curtain suspended from a rod and lit by light radiating from Jesus.  Above is a vignette containing ears of corn.  “AND THEIR EYES WERE OPENED”.  “These windows were placed here by”

(18)  (above, right)Jesus in his white robes, light shining from his halo, stands in from of a kneeling man carrying a long staff.  In the background is a biblical city.  “The Damascus Road.”  The emblem above shows a bird – a phoenix – rising from flames.  “LORD WHAT WILL THOU HAVE/ ME TO DO”  “his widow ISABELLA ROSE BENNET THOMSON”.  The maker’s name is in a lozenge shaped pane – “J. BLYTH/ ER”.

(19)  Jesus, haloed and in a red robe, stands in front of a crowd.  In front of him is a boy cradling a basket of bread in his right arm and holding two fish by a hook in his left hand.  Both wear sandals.  Above is a golden chalice from which emanates sun’s rays.  The ribbon below reads “WHAT ARE THESE AMONG SO MANY”.  Below this again is a section with small lozenge panes, one of which contains the Scottish saltire.  At the bottom are the words “To the GLORY of GOD and in memory of/ JOHN JOHNSTON MASTER BAKER/ A tribute/ from his/ Daughter/ MARY ANN” 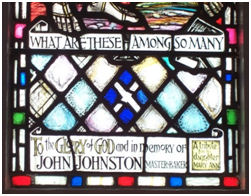 (20)  A modern, stylistic, window with a broad fleur-de-lis studded border to the lancet shape containing three roundels.  The uppermost houses a bird – its wings outstretched and diving downwards; the central roundel shows a herald of death with his trumpet hovering over a shadowy landscape, presumably Calvary Hill; the lowest has a burning bush.  The outer border of the central roundel has a Latin inscription “IN TERRA PAX MINIBUS BONAE VOLU-NTATIS”.

(21)  Jesus stands in front of a tree with sugar cone hills to the right.  Two small children approach; the boy on the left holding out a bunch of flowers in his left hand; the girl on the right has long blond hair.  The panel below reads “Jesus Bids Us Shine”.