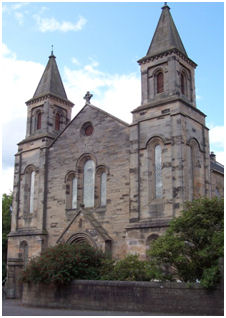 1498:  At Polmonth a chaplain at the chapel of “the Blessed Virgin Mary” is mentioned in a royal charter (Registrum Magni Sigilli vol.II no 2441), as is a high altar.

1649:  Proposals were made to establish a church in the eastern part of the parish of Falkirk.

1724: Polmont disjoined from Falkirk and erected by the Commissioners of Teinds into a full parish on 22nd July.

1730: 7 acres of land bought from Patrick Bennet of Whyteside for the erection of a new church, graveyard and manse.  William Douglass of Edinburgh provided the design for a church. 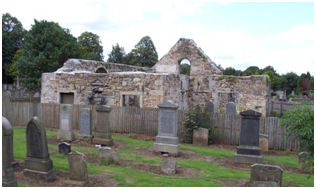 the churchyard and then in the porch of the new church).  Dressed stone came from South Queensferry, and rubble stone from Gilston Quarry and Maddiston.  Building completed with three galleries or lofts entered by external stone stairs.  It was T-shaped in plan with the pulpit on the long wall. The main block measures 75ft 9 in from west to east by 30ft 6 in transversely over walls 3ft thick, with the aisle 29ft 9 in wide projecting from the middle of the north side and open to the interi­or.   The masonry is of large rubble with dressed quoins and margins to voids, backset on the south side only.  The walls finish in a cavetto eaves-course and the gables have plain tabling.  The apex of the aisle gable has carried a bellcote, now vanished.  The south side shows a square-headed central door, now built up.   On either side of the door there is a large, high round-headed window, subdivided by plain tracery into two pointed lights; the lower parts of both these windows have also been built up.  Each of the three gables  has  a square-headed central door measuring 6ft 6 ins by 4ft 6 ins, with the  raggle of  a  porch  above and, on the upper level, a high  round-headed  window  with crooks  for  outside  shuttering.  The east and west gables  also  have  square windows, measuring 4ft each way, on either side of the doors; but in the aisle the  corresponding windows are placed in the side walls, with narrower ones  at the  upper level and slightly further to the south.  In the north wall of the main block there are also two similar windows at the upper level, near the junction of the aisle.   Total cost was over £330.  Sackcloth bought.  The architect was Mr Adams (father of Robert).

1735: School built on the opposite side of the road to the church.

1736: Half way up the south wall a sundial was inserted between two windows and above the central doorway.

1757: Robert Heart, stonemason, carried out repairs to the church and school.

1807: Repairs to the fabric of the building.

1844:  In April a quarter of an acre of land to the south of the church was bought from Miss Kincaid.  The foundation stone of the new church was laid in the south tower and reads “Founded 10th May, 1844”.  A time capsule, consisting of coins, newspapers and archives was placed behind it.  John Tait of Edin­burgh was the architect and William Thorburn of Polmont did the mason work.  The stone was quarried form Brightons and Maddiston.  The church faces east onto Bo’ness Road with an imposing facade consisting of a gable flanked by twin spires.  It is Romanesque in style.  Cost £2,581.  Officially opened for worship on 20th July 1845, and the unwanted materials of the old church were sold off in the following August.

1899: New hall opened 11th May to a design by James Strang, Architect, Falkirk.

1730s: Built a few years after 1732, Kinneil House is still lived in.   Patrick Bennet, the first minister, lived at his own house of Whyteside and the manse was rented out with part of the rent going to the minister.

1954: Old manse sold and a new one purchased in Main Street.

1928:  Communion table gifted by the congregation, made of Austrian oak in the early eighteenth century Scottish Renaissance style with decoration consisting of sheaves and vines.  Dedicated to Rev McKenzie.

1950: 2 chairs from the family of the Late Captain & Mrs Harvey, Weedingshall, and Trustees of the Boyd family, Little Kerse.

1951: Choir stalls and gold plate dedicated to those who fell in the World War.

1956:   New  pulpit  of  Austrian  oak  with  carved  pillars   enriched   with ecclesiastical  symbols depicting strength,  holiness and beauty.   The central coloured panel is a carving representing the Agnes Dei resting on a book with seven seals, three fishes to the right and a dove to the left.

1969: Crack developed and bell recorded for future use.

1844: Accommodate 900 people in the ground floor area and the gallery.

1734: Two gravestones of this date can be seen.   There are also two temptation stones.