(1 & 2) These two windows are set either side of the altar in the west gable of the church. They have a painting quality about them.  That on the left depicts the Annunciation.   The upper part contains an angel, her outstretched arms holding a banner that reads: “GLORY TO GOD IN THE HIGHEST AND ON EARTH PEACE GOOD WILL TOWARD MEN”.  At her feet three shepherds look up in surprise and wonderment.  They are amongst their flock of sheep and two have crooks and the central one carries a drinking flask and flutes on his belt.  Light from the star of Bethlehem shines down. 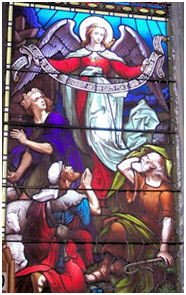 Below is a geometric panel with thistles in the centre.  Along the bottom the inscription: “The gift of Walter Scott, son of the late Alexander Scott, Gilston, in affectionate remembrance of his youthful days at the Parish School of Polmont – June 1876.”

The right-hand window has a Greek temple and a Roman soldier in the background.  Jesus is shown preaching in front of the temple to a small crowd that includes a priest and a mother with a small child.  In the upper part of the window is a dove; and the lower part contains lilies of the field.  “In memory of Johan Theodor Salvesen, born at Mandal, Norway, August 8th, 1820, died at Polmont House, December 23rd, 1865; and of Frederikke Marie, born at Grangemouth, May 20th, 1855, died at Fransensbad, Bohemia, September 4th, 1873.  June 1876.”