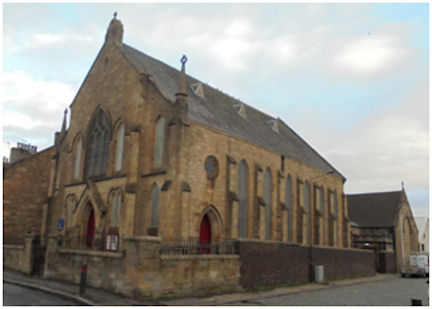 c1860: Falkirk Free Church started holding services in a house in Granary Square.  As the numbers attending increased they moved to a barn at Inglis Land on the west side of Bainsford Main Street.

1879: Church built in Hendry Street according to plans by Black in the Gothic style.   The body of the church measures 44ft by 6ft internally and has six arched windows down either side between buttresses.   The seventh bay being occupied by a quatrefoil window above a pointed arch door.   The vestibule measures 12ft by 24ft.  Cost £2,000.

1923: North End Hall gifted by Trustees of the Rev.  Aeneas Rate, probationer, who held services here before the Free Church congregation was formed.