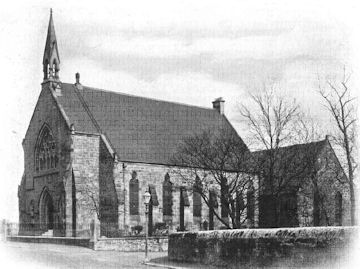 1878: April meeting of UP Church considered the propriety of missionary work at Carron.   Meetings began in June in a schoolroom at Carron Public School, and John Yellowlees appointed as missionary the following month.  Request from the people in this area to form a separate congregation from the Erskine Church in Falkirk.

1881:  New church opened on 10th June at a cost of £2,088 but free of debt.  Church  in  the Early English Gothic style a window at either  end,  two  small windows  at  each side of the main entrance, and five large windows down each side of the church.  The front face was stepped.  Above the main doorway was a spire-belfry 70ft tall.  The side walls were buttressed.  The whole made of Dunmore freestone.  Internally it measured 56ft 6ins by 40ft 6ins.  There was a vestry and ladies room at the end.  The hall for 250 people, together with the boundary wall and landscaping added £520 to the cost, and was opened in 1883.    Architect, James Boucher, Glasgow, and the builders Messrs Taylor & McFadzen.

1963:  Nov.  17th Congregation united with that of Stenhouse to become”Parish Church of Stenhouse and Carron“.

Communion service gifted by Rev Yellowlees and his wife.

1881:  Cast by John C. Wilson, Glasgow, given by the minister’s brothers along with a clock.