The present Larbert Old Parish Church was designed by the celebrated architect David Hamilton and built in 1820.  It replaced the previous building which stood in the adjacent churchyard and dated to the first half of the 16th century.

However the religious history of the area predates this building by many centuries and goes back to at least the early 12th century when ‘Lethbert’ along with ‘Donypas’ is described as a chapel of the church of ‘Egglis’ or St. Ninians.    In 1166 both were gifted to the Abbey of Cambuskenneth and remained the property of the Augustinian Canons there until the Reformation.  Just before this the existing chapel, whatever form it then took, was replaced by a new church building described as ‘oblong and severe in design’.

Within  thirty years of the Reformation Larbert became a Parish in its own right but in 1617 it was reunited with Dunipace, a link that remained until 1962.  Dunipace seemed to be the superior church and the Larbert building was abandoned for some years before it was restored under the influence of the famous Minister Robert Bruce of Kinnaird .  Bruce was one of Scotland’s most famous religious reformers and when he died in 1631 he was buried in Larbert churchyard.  The old manse building dates from the period following  the Bruce restoration.

The arrival of industry in the parish with Carron Company in 1759 increased the population and brought new money into the community.  This in turn brought pressure for a modern church and Hamilton’s gothic building of 1820 was the result.  The church cost Â£3,300 and was built by Muir and Wright using honey coloured sandstone from Thorny-Dyke quarry.  The builders were also allowed to keep the stones of the old church.   There was a major renovation in 1887 when a pipe organ was installed and a chancel was added in 1911 to the design of Peter Macgregor Chalmers. 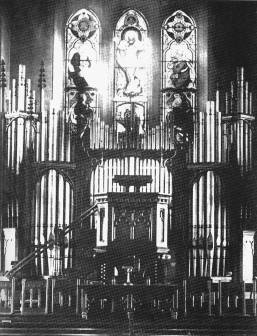 The Church before the addition of the chancel in 1911

The graveyard contains the tombs of Rev. Robert Bruce, James Bruce the celebrated ‘Abyssinian Traveller’ and many of the leading men of 19th century Carron Company. 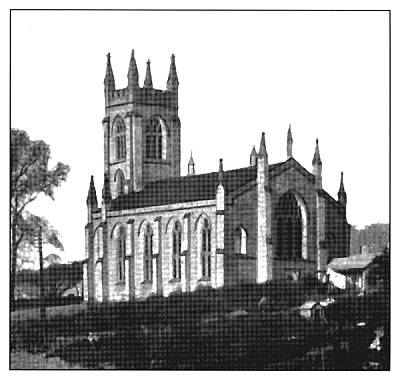