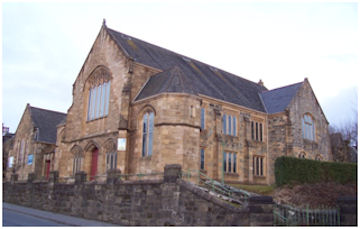 1897:  Due the growth in population in the area it was decided to erect a new church between Stenhousemuir and Larbert.  Just over 0.5 acre of land was feued from the Carron Co at Crownest.

1898:  Hall erected and opened in June, the new congregation being formed in July from the Carron U.P. Church.  The hall lay on the south side of the public road form Larbert to Carron at Burnhead.  This was part of a larger scheme that was soon completed, the architect was J P Goodsir of Falkirk, and the mason was John Gardner of Falkirk.  Cost £1,450.

1901:  Church erected adjacent to the hall and connected through the front vestibule to the east staircase wing.   Owing to the considerable slope much excavation work had to be done to raise the site above the roadway.   The arrangement of nave and transept made it cruciform in plan, 72ft by 42ft and 58 by 24ft.   Beyond the back wall the pulpit recess is spanned by a wide stone arch.   The entrance to the church lay in the centre of the north or front gable, with three-light windows on either side.  Above the gable is pierced by a large five-light traceried window.   Flanking this gable on either side are the staircase wings with octagonal shaped ends.   Inside an end gallery was provided with provision for side galleries if required.  The nave is light from both sides by double rows of three-light windows.   The transept gables contain large mullioned windows of two- and four-lights.   The open timber roof is divided into bays by heavy principals with cambered tie beams.   Vestry and committee rooms lay behind the east transept.  The architect was J.P.  Goodsir of Falkirk, and the masons were J.J. & P. McLachlan of Larbert.  Cost £3,700.  Opened 5 October 1901.

1914: Hall used for refreshments by the armed services, and the following year as a billet.

1922: War memorial placed in the church.

1939:  Road  in front of the church widened and a high  retaining  wall  built removing  the  central flight of steps and replacing them with flights  at  the west and east ends of the frontage.  The Men’s Handicraft Party built a wooden storage hut between the church and the hall that became known as the ‘Lesser Hall’.

1990:  Passageway from Lesser Hall to kitchen added, with a porch and access ramp.

1963: Pulpit obtained from a redundant church in Strathblane.