In the chancel behind the organ are two stained glass windows, the gift of Mrs Callander, The Hazels, in 1905 in memory of her husband and son.   They depict the Resurrection and the Ascension.  Designed by Stephen Adam.

A winged figure (female) stand with arms spread out looking down on three kneeling figures.  Its back is to a tree and to the right three crosses can be seen silhouetted on a hill.  Above in the dark sky is a prominent central star, with a lesser star to the right.  The bottom panel contains white lilies.  Here is the inscription: “WHY SEEK YE THE LIVING/ AMONG THE DEAD/ ERECTED BY MARY CALLANDER/ IN MEMORY OF HER HUSBAND/ JOHN CALLANDER/ DIED 16 NOVEMBER 1890 AGED 48 YEARS.”

(2) To the right in the chancel apse.

Jesus is shown bare-footed in white robes and a blue cloak walking towards the observer.  He has his usual halo.  To either side of him shafts of white light emanate from a cloud above his head.  A coronet features prominently in the cloud, along with several winged heads.  Three people kneel at his feet, with pink chrysanthemums around them.  The bottom panel has the following words: “I GO TO PREPARE A PLACE/ FOR YOU/ ERECTED BY MARY CALLANDER/ IN MEMORY OF HER SON/ JOHN ALLAN CALLANDER/ DIED 31 DECEMBER 1902 AGED 29.”

(3) Under the south loft (now in the outer lobby of Falkirk Old Parish Church).

A small single-light window in a modern style with prominent patches of blue and red.  Bold black lines are used against pale backgrounds to depict detail such as facial features.  It shows a child standing with its arms spread upwards in front of a crowned figure.  The latter holds an up-ended spade shaped object – perhaps a palm leaf – in his left hand and a sceptre-like device in his right, 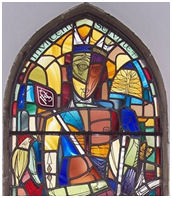 terminating in the Falkirk High School monogram.  The lettering at the top, partly obscured by the frame, reads “INVICEM SERVITE” – the school’s motto which translates as ‘Serve in your turn’ but was always translated using a Bible verse “Bear ye one another’s burdens”.  There is a bird on the top left; fish and saltire on the bottom left; a man’s head on the right and leaves.

A two-light window with the design spread across both.  The main scene depicts Jesus washing the feet of his disciples at the Last Supper.  He wears a white robe and kneels in front of the table next to a bowl.  One disciple stands in front of him, the remainder behind the table.  An arch in the centre unites the two parts.  “LORD thou shalt never wash my feet” appears above.  The top of each light is occupied by birds in nests; that to the left being in blue and showing three white chicks with a long-beaked parent above, that on the right in red, phoenix-like.  Below the scene is a ribbon on a grape vine “To the GLORY of GOD/ and in grateful/ and loving memory of/ Thomas Laurie and Jeannie —len Spence/ our Father and our Mother”.  The spandrel lights have – left: a serpent entwined around a tree and right: a coronet.

A similar window to 4.  Jesus is shown on the left standing in a building with Arabic arched arcading and ornate furniture stands.  To the right are a number of scholars with scrolls and writing tablets.  Above are left: a blue angel kneeling in prayer; right a red angel sitting playing a lyre.  “I am the Light of the World/ he that/ followeth Me/ shall not walk/ in darkness but shall have/ the Light of Life”.  At the base the panel contains “TO THE GLORY OF GOD AND IN MEMORY/ OF JOHN HIGGINS OF THIS CHURCH/ 1870-1950 WHO LOVED THE LIGHT THAT/ ILLUMINES ALL THINGS BEAUTIFUL/ ERECTED BY/ HIS WIFE/ ANN 1952”.  It rests on oak leaves and acorns.  The spandrels have the Lamb of God and a dove.

(6) The partner to 5.  The main scene shows Jesus and some of his disciples reclining on a fabric covered couch.  In the right foreground a young woman in a red robe uses her long golden coloured hair to wash the feet of Jesus.  A vase and unguent bottle lie on the ground in front of her.  A disciple in a purple robe standing on the left looks on in disapproval – he holds a small bag in his hand (money?).  There is a bowl of fruit on the centre with two women and the disciples eating from it.  Through the arched windows the city can be seen in the background.  The tops of the lights are filled with left – a burning bush, emblem of the Church of Scotland; right – an ark, emblem of the Universal Church.  The ribbon reads “SHE HATH WROUGHT/ A GOOD WORK UPON ME”.  The two tracery windows have a chalice containing a red cross on the left and a blue anchor on the right; and below each “Faith” and “Hope”.  The basal inscription is “To the GLORY of GOD/ Erected by the/ Guild of/ Women of Erskine Church/ to commemorate the/ Bi-centenary/ of that/ Congregation 4th April 1937”.  This lies on a spread pomegranate tree.

Designed and executed by Alexander Strachan, Edinburgh, it shows Mary anointing the feet of Christ.