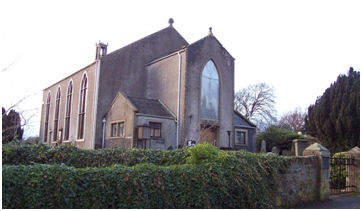 Originally in the parish of Falkirk. Haining Castle contained its own private chapel on the second floor.   The castle appears to date to the late fourteenth or  early  fifteenth  century and it is possible that at this  early  date  the Crawford  family’s  priest  ministered to some of the local people,  for  as  a result of a petition by Rankin de Crawford in 1454  a  papal  mandate  directed  the Bishop  of  Dunblane  to  grant  to  the inhabitants  of Manuel the right to elect a clerk-minister to help the chaplain and priest who celebrated divine offices in the church or chapel.   The church or chapel was said to have had cemetery, baptistery, chrism vase, burial place, and a priest from time immemorial.   The relative positions of the castle  and the  later church suggests that the building referred to in 1454 also lay close to  the  castle,  as  would be normal at that date,  and  is  not  therefore  a reference to the “Popish Chapel at Ballenbreich”.

1641:  Lord Livingstone held patronage of Muiravonside Church, which was a pendicle of Falkirk.

1648: Muiravonside disjoined from Falkirk Parish on 10th June, the Act stating that ”albeit it has been distinctly and separately served by a Minister  above 60  years gone” it had been a pendicle of Falkirk.   This confusion appears to have been common and even the presbytery record of 1606 is said to have treated it as a distinct charge.   At some time in the seventeenth century the church became known as Almond Church, the Castle also passing under this name having taken the title from Lord Livingstone.  The old church building at Manuel Nunnery seems to have been adapted for use as a parish church.

1804-6: Present church and manse built.  The church is rectangular in plan with four tall pointed windows subdivided by wooden mullions and transoms and glazed with diamond panes.   The window margins are backset, and the rendered east and west end walls scored to resemble ashlar.   Over the east gable is a large corbelled out bellcote with rectangular uprights and ball finials.  The pulpit was in the centre of the south wall facing a horse-shoe gallery wrapped around the other three walls.  Doors in the west and east gables opened onto internal stairs to the gallery, and a door in the south wall, just to the west of the pulpit, was for the minister.

The session house was on the north side of the entrance gate to the churchyard.

1947: As a result of woodworm and dry-rot internal alterations were carried out, providing a central W/E aisle.  The pulpit and chancel were placed at the west end gable.  A new vestibule added to the east end containing a vestry and a session house built.  The old session house was demolished and the cross that had been mounted on it was placed on the east gable of the church.

1676: Silver communion cups presented by the Earl of Callendar and Lord Almond to the church of Almond and Rev. Andrew Urie.  “Hoc potulum as ecclesiam de Almond pertinent.”

1806:  Pulpit in the centre of the south wall with pews on three sides and a semi-circular gallery.

1947: Re-arranged due to woodworm and dry rot.  Main axis changed to east/west, with the chancel furnishings placed on a raised platform against the west gable.  Seating for 400.

A cemetery and burial place are mentioned in the Papal communication of 1454.  The earliest stone in the present cemetery that surrounds the church is 1705.  An extension to the churchyard has been made to the east.