In 1759, two Englishmen, Dr. John Roebuck and Samuel Garbett, along with William Cadell of Cockenzie decided to form a company for the purpose of making iron. They resolved to use a method which had been perfected by Abraham Darby of Coalbrookdale in which coke was used in the furnace, instead of the more usual charcoal. Coal and ironstone would be obtained from the relatively untapped mineral fields of Central Scotland. Garbett eventually found the perfect site on the north bank of the River Carron, on the Stenhouse Estate of Sir Michael Bruce, two miles north of Falkirk. Of prime importance was the power of the river. In those days, Scotland was undeveloped industrially, so all of the materials used to build the works, the craftsmen to carry this through and finally the foundrymen to operate them, had to be brought at high cost, from England. These men however, were expected to teach their trades to the local people from around the nearby town. Overseeing the whole operation, was 23 year old William Cadell junior, who had been appointed manager.

The lintel of the first blast furnace now on display at the works.

The first blast furnace was brought into use on the 26th of December 1760 and a second came into service the following year. The company was, at that time, known as “Roebucks, Garbett and Cadells”. Anything that could be made in iron was cast, but perhaps the main objective was to begin the lucrative business of making cannon. By 1765, a contract had been obtained to supply guns to the British Navy, but by 1773, because the guns were of bad quality, this contract was lost and guns of Carron manufacture were withdrawn from all ships of the Navy. That same year, the company, now known as “the Carron Company”, was granted it’s Royal Charter which allowed it to operate on almost modern day lines as a limited liability company.

By this time the control of the company was in the hands of Charles Gascoigne, the son-in-law of Garbett.  A ruthless and determined character, he drove the company forward ensuring that the problems were overcome and that Carron was on a sound financial footing.  However he left for Russia in 1786 to set up iron manufacturing for the Csarina Catherine the Great and did not return.

Many famous people were associated with the works, which at times must have seemed like a never ending experiment. There was John Smeaton, ‘father’ of civil engineering, builder of the first stone Eddystone lighthouse and designer of the Forth and Clyde Canal. He was consulted on any engineering problem faced at the works and designed many machines for use there.

Henry Cort also came here to experiment with a  method  for  mass  producing  malleable  iron  which eventually,    at   another  works  became  the  ‘puddling process’.   The  American  inventor,  Benjamin  Franklin visited  the  works  and is said to have left a design for a stove –  ‘Dr. Franklin’ s stove  or  the  Philadelphia stove’. Another  notable  name  at  Carron was  that  of William Symington  who had the engines for the Experiment and the Charlotte Dundas,  made there.  Designs for firebacks and  balustrades  were   by   courtesy   of  the Adam  and Haworth brothers. 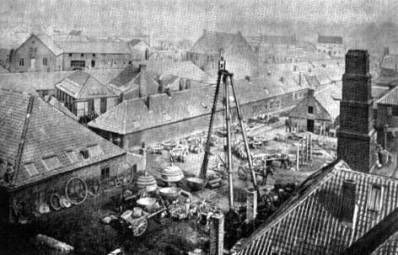 After much hard work, a re-appraisal of manufacturing methods and an improvement in the quality and types of iron made, cannons known as “the new light constructed guns”, were made from 1776 and were a success, being sold here and abroad, but they were still refused by the British Government. It was two years later in 1778 that a completely new type of gun made its appearance at Carron; it was shorter than the cannon and had a much larger bore and was to be called the ‘Carronade’. This gun was soon in demand for use on private ships and was eventually accepted  as suitable for use by the British Navy. They came into their own at a time when opposing ships engaged each other in battle at close quarters, one drawback being their limited range. Many changes would take place in the development of this gun between then and 1800. With the success of the Carronade, the fame of Carron Company spread and also led to the making of a new type of cannon at the works from 1796; the “Blomefield” gun or “Government Pattern” gun.

On Sunday the 26th of August 1787, Robert Burns came to the works but, because it was a Sunday and he didn’t have the necessary “ticket”, he was refused admittance. Along with his friend Willie Nicol, he retired to the Carron Inn opposite the works and had breakfast. He took his revenge by scoring a verse of poetry on a window of the Inn.

At that time the manager and later a partner of Carron Company, was an Englishman called Joseph Stainton. For many years, the works would be in the hands of the Staintons and their relatives, the Dawsons. Under their direction, the company thrived, but it was not until the death of Joseph’s brother Henry in 1851, that it was discovered that the accounts books had been systematically “cooked ” for years. After lengthy litigations, Henry’s family had to pay back to the company, and hence the shareholders, a vast sum of money. However, it was William Dawson who first suggested a modernisation programme at Carron. New furnaces were built in 1870 and between 1875 and 1883, old buildings were torn down and new ones appeared. The whole area of the works was increased which necessitated in the road to Stenhousemuir being diverted for the umpteenth time since 1760. 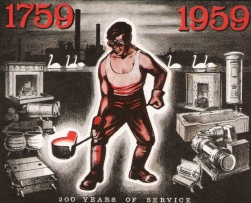 The new works were laid out in an integrated fashion and an office block with warehouses was erected on the Stenhouse road. Standing in the middle of this block like a sentinel, the clocktower. One acknowledgment to the past at Carron, was the inclusion in the walls of the tower, of a lintel of the first blast furnace and part of a cylinder cast at the works in 1766 for James Watt, who had worked under the auspices of  Dr Roebuck, whilst developing his improved steam engine.

In the early years of the twentieth century, Carron Company held it’s own against competition from all over the British Isles and beyond, the main product, with the exception of pig-iron was the cast iron Carron bath, first introduced in 1866. During both world wars, the company turned to the production of munitions and, at the end of the 2nd World War, Carron Company was ready to meet the demands of peace time reconstruction in the building industry, supplying a large range of domestic products including fire grates, gas and electric cookers and baths. For many years, large cooking ranges were made for ship’s galleys and the kitchens of prestigious institutions. They had even made iron tiles for the roof of the Houses of Parliament. Back in 1962, the biggest contract ever awarded to a Scottish Ironfoundry came Carron’s way. It was for the production of cast iron rings made in segments, for the Jarrow-Howden tunnel under the River Tyne. Expertise had been gained in this field in the previous three years when the same product had been supplied for the Whiteinch tunnel under the River Clyde. At that time the production line featured castings for the General Post Office, the Admiralty and Volvo Cars. Other new directions were taken including  the production of stainless steel and plastic goods. Carron Company, which once had it’s own coalmines, a fleet of ships carrying goods and passengers, agencies worldwide, showrooms in major cities, a railway system (an early form had been in use from 1760) and ownership of most of the land in the vicinity, suddenly went into receivership in 1982.

After a series of management buy-outs, production resumed at the works under several individual companies such as, Carron Phoenix, Carron Steelyne and Carron Bathrooms, all carrying on the tradition of first class workmanship and quality of finish, benchmarks laid down by their predecessor many years before. All that remains of the old Carron Company, apart from some buildings erected this century, is the clocktower with it’s embrasure containing a display of Carron guns. Two ancillary works nearby, Mungal Foundry and Engineering Department, both built at the turn of the 20th century, were also demolished. The once famous Carron dams, which always contained a reserve supply of water, have long since returned to nature.

Over 170 pieces of ordnance were made at the either the Carron Iron Works or at the Falkirk Iron Works.  There will be many more out there and we would appreciate it if you could contact us to let us know the presence of any others – or to provide us with photographs. Please respond to this page if you have any comments.